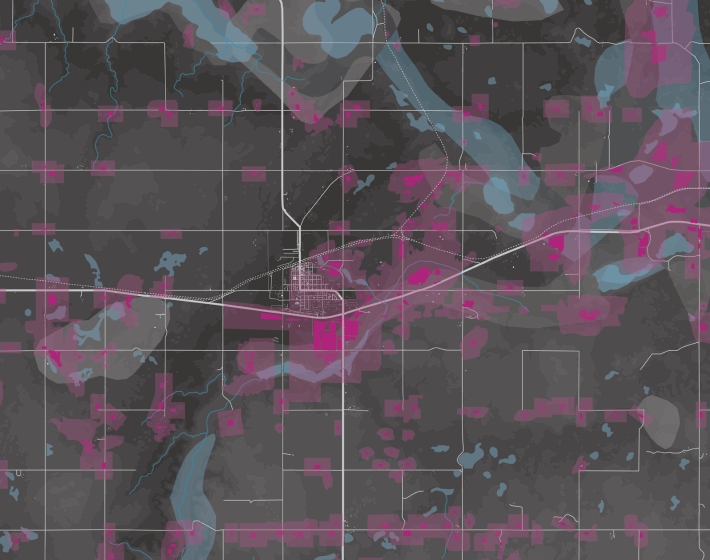 The project provides a constructed index of cultural memory and natural resources in a rapidly destabilizing landscape.

The infiltration of technology on the landscape is one of the most significant things in the debate over the Keystone XL pipeline. The pipeline itself could be a scar on the landscape, not to mention the danger of the oil it carries should it ever spill. But the important thing to recognize is that the U.S. has thousands of pipelines, and its landscapes and the people in them are already grappling with their psychological intrusion.

This is perhaps the most intense now in the oil ‘boom towns’ of North Dakota. Aerial views of the western half of the state show a countless proliferation of oil patch sites, each one bringing with it oil derricks, rigs, natural gas flares, and heavy trucks and machinery. The people here are seeing their rural hometowns shift before their eyes, and they no longer know their neighbors. They are surrounded by an industry whose products will bypass them. This phenomenon is having a large impact on the erosion of cultural identity in the area. This project asks in response to this—How can architecture allow for people to react to a technological trend that is so invasive? My proposal furthers the healing process beyond talk at the local diner to something that engages and overlaps the existing processes of oil, agriculture, and people, creating a place for a visual confrontation between them. At the same time as it addresses these goals, the project also houses a seed bank to tactically preserve the landscape that may, in the coming years, be forever changed by oil.

The oil industry cannot be stopped; instead, engagement with it is found through innovation in its indirect processes, such as the collection and reorganization of waste. The waste products of all of the actors—oil, agriculture, and people—have alternative purposes to be capitalized on. Each one is associated with a way of collecting resources from the landscape, a process that is manipulated at certain points throughout the project. The expanded time and depth scales of oil extraction—a process that taps into reserves 65,000,000 years old and 10,000 feet deep—initiates an approach that deals with strata of the landscape and manipulation of the earth at a human scale.

Oil is a point-source extraction with immediate transportation to the national oil industry headquartered in the south. In productive flowback, the wastewater (aka flowback) from fracking is transformed into a surface of water filtration through a constructed wetland.

Agriculture has a horizontal but isolated collection process from the field to the grain elevator. In the grain exchange, harvest byproducts, such as seed and plant waste, are used as biomass to fuel small energy generators throughout the site. Living samples are also brought in routinely to provide a collection for the seed bank.

The landscape itself extracts and deposits through the long-range process of erosion, much of this heightened by people. In the proposed ‘Garbage of the Month Club’, people use their own waste to anchor the form of the project—a series of retaining walls—into the landscape. People receive ‘deposit boxes’ that are to be filled with unwanted junk; these are then embedded in the land to structure the site, and also allow residents of fluctuating North Dakota to shed some layers and find new identities in the face of extreme technological change.

In this system of mutual exchange, heavy industry is used to set up the main objective of the project: providing people a form of healing by creating a process in which they can put something back into the landscape. When they can take charge and affect change on their surroundings, even in small ways, they become not bystanders but actors in the change of their hometowns.

The project takes place in Stanley, North Dakota, in a buffer zone between the city and a major railroad hub for the oil companies. The manipulations of the existing processes are brought together in a series of buildings-as-retaining walls that are configured to structure the artificial wetland that processes the oil flowback. Each one is created by the deposit boxes of the garbage of the month club, which are organized in a structural cage that holds back the cut of the land while opening at certain points for the larger programs of the grain exchanges, seed bank, and public viewing spaces. The land between each building is allowed to sink down to allow for filtration pools that assist with the 5 stages of the wastewater processing: large object removal, sediment tank, plant filtration, UV radiation, and use as grey water at the southernmost building, the seed bank. To the west the site is elevated, creating a new platform from which to view the effects of the oil industry. From this promontory, the residents are given the visual agency of being overseers of the changes taking place. 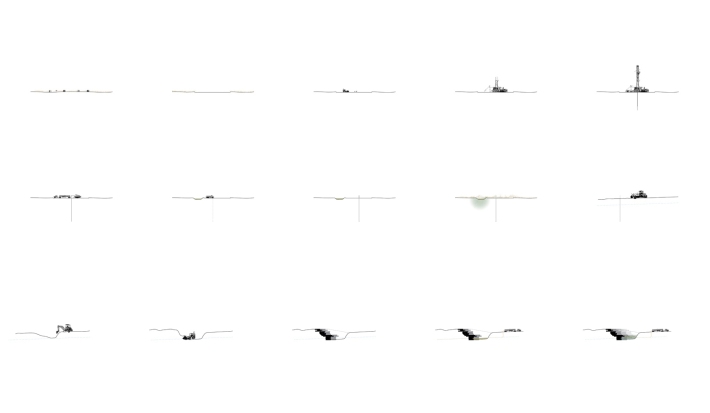 Certain programs are geared towards different timescales of needs and activities, both now and in the future. Farm, oil, and people interact in the present in an overlapping process that allows them to simply come into contact with each other. At the same time, this visual confrontation is organized to construct a real and lasting space. There is an eye towards preservation, both of the landscape and its seeds, and the people and their objects. As the buildings grow and settle in to the landscape, the junk deposit boxes also establish a record of the people that created them—what they collected, where they were from, when those objects were used. 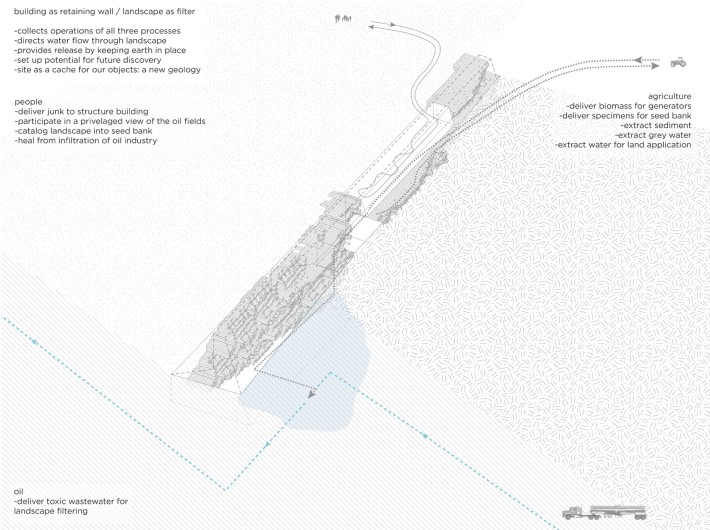 This re-establishment of cultural memory is ultimately what lasts on the site. There are many unknowns for this region’s future, especially in the next 20-50 years as the oil activity dissipates. It is uncertain if the landscape will even be a populated place in the next few hundred years. The deposit box structural system has a critical mass that is resistant to decay, allowing it to linger on the landscape. When the boxes are rediscovered (if indeed they are eventually forgotten), they give a new life to the current residents’ waste. This potentially gives the people the last laugh in the issue of oil and technology infiltration: their junk becomes a future geology, waiting to be discovered, researched, categorized, and reimagined.

This project has been a first step in engaging the question of architecture with extended time and scale. While not normally in the purview of the architect, several practitioners are encouraging an expanded role. There is a thrilling freedom in opening up the question of architecture to include issues of energy, industry, and contested landscapes. With the focus of oil, energy, and the Keystone XL pipeline this scope becomes necessary to begin to understand all the components of the issues at hand. The ‘boom towns’ in particular are in the beginning of a decades-long process of change, and in order to figure out what to do there now it is relevant to also imagine how they might change in the near future.

This project uses the industrial processes of waste reorganization to bring stakeholders together at a particular site in Stanley, North Dakota. It can also be viewed as the initial steps towards developing a prototypical response to the new oil landscape in the state. Waste management is something that is vital but increasingly difficult for these areas as their populations temporarily explode. The processes proposed could be repeated in many other oil towns in North Dakota, and the building itself could be calibrated to include localized programs or to collect certain types personal junk common in each area. However, moving forward, it will be important to forefront the questions of cultural erosion and memory, and the healing qualities the project can create for residents of these types of landscapes.